Iron Deficiency Chlorosis (IDC) is a common soil issue in some areas of the country. IDCtends to occur in soil with high pH levels, which can prevent plant roots from reducing iron to a soluble state that can be used by the plant. The problem isn’t necessarily the lack of iron in the soil, but more importantly the type of iron that’s available in the soil for plant uptake.Iron is commonly in a ferric (FE3+) state when it’s in the soil, but the plants’ roots need to reduce the ferric iron (FE3+) to ferrous iron (FE2+) to make it soluble for uptake by the plant.

Why is Iron important?

Iron is critical to the development of chlorophyll within the plant. When iron gets bound up and is unavailable to the plant, it creates a chlorophyll imbalance and causes the characteristic yellow leaves in plants with IDC.

There are three indicators that help determine Iron Deficiency Chlorosis:

West Central Distribution developed an iron fertilizer solution called Soygreen® that uses the most effective iron in agriculture and was specifically developed for soybeans, dry beans, sugarbeets, sorghum, sunflowers and cotton that suffer or are at risk of suffering from IDC.

Soygreen is chelated with Levesol™, the purest and most concentrated ortho-ortho EDDHA chelate on the market. This is what makes it Soygreen the most effective IDC product in agriculture. As an industry leader, Soygreen’s ortho-ortho EDDHA chelate helps keep iron in its soluble state (Fe2+) for maximum uptake by the plant. In addition, Soygreen also makes other essential nutrients in the soil more available to the plant.

The following are some recommendations for using Soygreen to fight back against IDC and maximize your soybean yield: 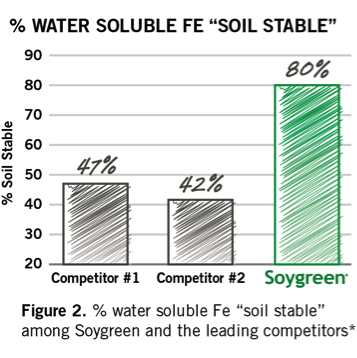 Read more about how a grower in Cottonwood, Minnesota used Soygreen with in-furrow application on his farm to achieve a great yield and maximize the return on his investment.

Find out more about Soygreen at wcdst.com.